While the organizers of the 2016 International Hydrogen Conference, I2CNER’s Hydrogen Materials Compatibility Division Lead PI, Dr. Brian Somerday, and I2CNER’s Director, Professor Petros Sofronis, have stepped down from their organizational duties, they are pleased to announce that there is a plan to have another conference in 2020. The new organizers for the 2020 Hydrogen Conference are Dr. May Martin from NIST and Prof. Jimmy Burns from the University of Virginia.

The website for the 2016 International Hydrogen Conference is now active. Please visit the website (http://conferences.illinois.edu/hydrogen2016) to find more details about the 2016 conference.

In tandem with the website going live, the abstract submission form is now also live. Abstracts which focus on the following topics are encouraged:

The abstract deadline will be January 15, 2016. Please visit the conference website (http://conferences.illinois.edu/hydrogen2016) to download the abstract template.

The organizers of the 2012 International Hydrogen Conference, I2CNER Hydrogen Materials Compatibility Division Lead PI, Dr. Brian Somerday and I2CNER Director Professor Petros Sofronis, have announced that they plan to host another conference in 2016.

The I2CNER Catalytic Concepts for Energy Symposium was held at the University of Illinois at Urbana-Champaign (UIUC) on Friday, September 13, 2013. The symposium featured a diverse group of both national and international researchers specializing in catalysis issues.  The topics covered included proton, oxygen, nitrate, and carbon dioxide reduction; non-platinum metal electrodes for catalysis; alloys and composite materials for catalysis; mass spectrometry; and electrochemical methods.

Not only did the Catalytic Concepts for Energy Symposium introduce I2CNER as a stakeholder in the field of catalysis to some of the experts in the field and vice versa, it also allowed all participants a unique opportunity to interface and explore possible new research directions.  In particular, the I2CNER hosts have reported that they used this event like a think tank to brainstorm about I2CNER’s present and future research efforts on catalysis.  I2CNER Director Petros Sofronis stated that the event was “an overall success.”

In light of the success of the symposium, the organizers are planning to “establish/carry on the tradition” by hosting a subsequent symposium on catalysis issues at the Kyushu University campus in Japan.

Professors Elif Ertekin, Lane Martin, and Angus Rockett of the Illinois Satellite of the International Institute for Carbon-Neutral Energy Research (WPI-I2CNER),  have been jointly awarded a two-year, early-stage project in the University of Illinois College of Engineering’s Strategic Research Initiatives program.

Their awarded proposal, entitled “Atomic-Scale Design of Oxide Heterojunctions for Energy Conversion,” aims to produce vastly improved photocatalysts for solar hydrogen production as well as energy-efficient environmental remediation by pursuing a transformative approach for designing and synthesizing oxide heterojunctions for photocatalytic (PC) energy conversion devices.  Their unique approach combines semiconductor defect engineering to control the concentration and lifetime of photostimulated charge carriers, semiconductor band engineering to control the flow of charge carriers within the photocatalyst, the use of “hot” carriers with greater than thermal energies, and atomic-scale modeling of the free surfaces and solid-solid interfaces to optimize atomic defect injection during synthesis and carrier flow during operation.  Much of the groundwork for the proposal for this project was laid through the ongoing work that Professors Ertekin, Martin, and Rockett carry out as part of the I2CNER project.

The Strategic Research Initiative (SRI) program was introduced by the College of Engineering in order to help grow the research program of the University of Illinois and support collaboration in new and emerging areas.  The long term goal of the program is to place Illinois in a leadership position within promising new and growing areas of engineering research.  The majority of the financial support for this program is provided by the College of Engineering.

Congratulations to Professors Ertekin, Martin, and Rockett on this outstanding achievement!

The I2CNER Satellite hosted a retreat with the External Advisory Committee (EAC) on Thursday and Friday, May 30 & 31, 2013 at the University of Illinois at Urbana-Champaign campus.

The International Institute for Carbon-Neutral Energy Research (I2CNER) was recently featured in an article in Nature magazine called “Spotlight on Fukuoka.”  Follow the link below and click on the “Taking on the Hydrogen Challenge” tab to view the feature. 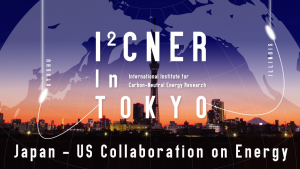