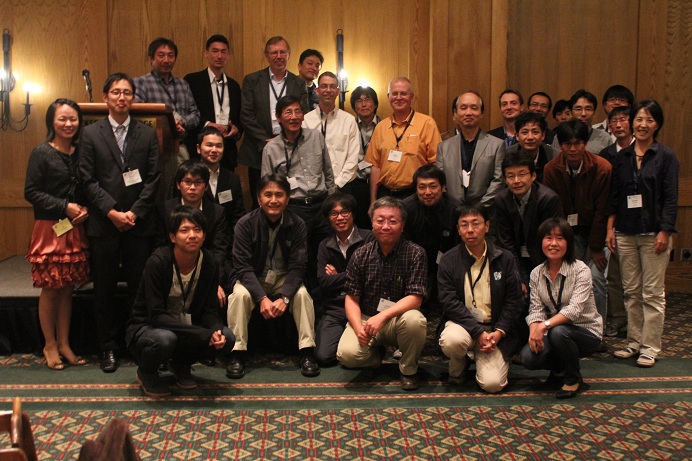 The 2012 International Hydrogen Conference was held at Jackson Lake Lodge in Moran, Wyoming, September 9-12.  Jackson Lake Lodge is located in the majestic Grand Teton National Park, overlooking the Grand Teton mountain range, and has been the venue for the last six conferences in the series.  Previous conferences in this series were held in 1973, 1975, 1980, 1989, 1994, 2002, and 2008.

The conferences in this series have been the premier topical meetings on hydrogen effects in materials, as demonstrated by past attendance and extensive citations of the conference proceedings in technical literature.  Since interest in developing hydrogen as a fuel is casting more attention on hydrogen-materials interactions, the continuation of this conference series was very timely.

The 2012 Conference attracted the most prominent researchers on hydrogen and materials interactions from around the world for a four-day event in which they exchanged and debated ideas, presented new research, and formulated future research projects on hydrogen.  On Sunday, September 9, the conference officially began with brief opening remarks from Dr. Brian Somerday.  The technical program for Sunday evening included invited presentations from two of the most renowned researchers in the field, Professor Bill Gerberich, University of Minnesota, and Professor Reiner Kirchheim, University of Göttingen.  Professor Gerberich provided a historical review of hydrogen interactions as well as proposed future opportunities.  Professor Kirchheim discussed generally hydrogen-induced defect generation and enhanced mobility of defects by hydrogen, based on his recently developed novel thermodynamic analysis called defactant concept.  The program concluded with an invited presentation on materials issues in implementing a hydrogen infrastructure from Katie Randolph, project officer for the U.S. Department of Energy’s Fuel Cell Technologies Program.

The Conference was attended by over 160 researchers, and included 55 oral presentations and 100 poster presentations.  The presenters covered a wide area of subjects, including effects of hydrogen on deformation, wear, fatigue, and fracture, fracture mechanisms in hydrogen environments, hydrogen-deformation interactions, hydrogen dissolution, diffusion, and trapping in materials, hydrogen-induced phase transformations, life predictions of structures in hydrogen environments, hydrogen effects on polymers, hydrogen effects on tribo-interfaces, effects of hydrogen isotopes and helium on materials, and modeling of hydrogen-materials interactions, including finite element, atomistics, and first principles.

This year, the conference was co-organized by Dr. Brian Somerday, Division Lead Principal Investigator of the International Institute for Carbon-Neutral Energy Research (I2CNER) Hydrogen Structural Materials Division and materials scientist at Sandia National Laboratories, and Professor Petros Sofronis, Director of I2CNER and professor at the University of Illinois at Urbana-Champaign.